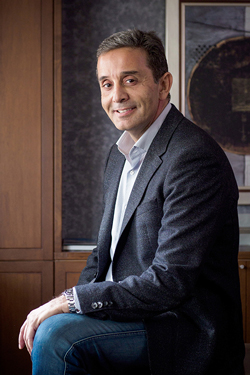 Graduated from the School of Civil Engineering at Nat. Technical University of Athens in 1987.
Completed two year service in the Limnos island as a core officer for the Special Forces of the Greek Military Air force.
On full scholarship from Vanderbilt University in the USA, he continued his post graduate studies where he earned a Master of Science degree in 1990. During his time there, he also lectured undergraduate students and engineers of the Army Corps of Engineers. Leaving behind the candidacy for PhD at MIT and a career in the US, he chose to return to work in Greece. Initially, he involved himself with the entire spectrum of design and construction of both private and public works, while in parallel teaching at the Technological School of Heraklion (TEI).

Then, after founding KALTEC s.a., he ventured into the business of building construction & real estate developing. He has successfully invested and constructed a large number of summer residences, apartment complexes and commercial buildings.
The rhythm of Greek classical architecture, the natural beauty and harmony of the Cretan landscape and the majestic allure of the Aegean sea, have guided him to his aesthetic preferences. The ease, simplicity, harmony and purity of the lines are the qualities that inspire and lead him to showcase in his own work.

Member of the American Society of Civil Engineering (ASCE) and American Water Works Association (AWWA). Served as vice president of the Athletic Corporation of Heraklion from 2008-2013. Member of the Panelinios basketball team in Athens as a teen and now is involved in cycling, tennis and his great passion, windsurfing.